December 26, award-winning  husband and wife production team, Steve and Joanie Wynn, are embarking on an volunteer adventure to Cambodia with non-profit Globe Aware.   They will be documenting the experience for their public television series, “Journeys for Good”, now in development with KQED-TV and their San Francisco Bay Area production company, Bayside Entertainment. 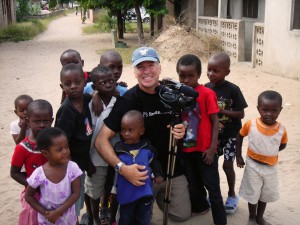 In 2009, the Wynns traveled to Africa with Roadmonkey Adventure Philanthropy to produce a documentary on a group of women who traveled across the world to do a hands-on volunteer project at a school for AIDS orphans. They built desks, refurbished classrooms, installed a clean water filtration system and replaced the school’s wood-burning stoves with clean burning gas stoves.  They worked side by side the local people and ate lunch each day with the teachers and bibis, or grandmothers, who cared for the children.  Their documentary on the experience, “A Journey for Good:Tanzania” aired on public television stations around the country in 2011/2012, garnering four Emmy nominations and two Telly Awards. 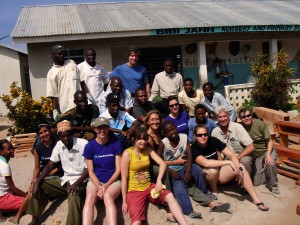 Voluntourists at the Bibi Jann School in Tanzania.

At the end of December, the Wynns will travel again, this time with their 9 year-old son Ryan, to Siem Reap with non-profit partner Globe Aware.  They will be building wheelchairs for land mine victims, many the same age as Ryan.  They will teach English to Buddhist monks .  They will build a well at a home for the disabled. 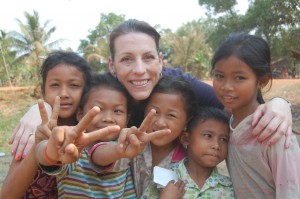 Footage from their trip will be incorporated into their series for public television and online media.  They will also be posting blogs throughout the experience on their voluntourism website Journeys4Good.com

Steve Wynn remarked, “We knew that our first volunteer trip to Africa would be an amazing story, but we had no idea how it would transform not just the lives of the volunteers, but our lives as well. We came home inspired to start Journeys for Good as a way to spread the word about voluntourism, showing people how incredibly rewarding this kind of travel can be.  “

Joanie Wynn added, “We are excited to share this with our son, Ryan and we will ring in the New Year in Cambodia, kicking off what we hope will be an inspiring and adventure-filled 2013.”

The Wynns developed Journeys for Good as a way to spread the message of volunteer travel.  The series, website and related online and social media will celebrate volunteer travel experiences, volunteer heroes, and voluntour organizations that make a difference.

Journeys for Good is currently in development as a series for public television and will be distributed through KQED-TV,San Franciscoand American Public Television.

KQED quote about the series:

“We expect Journeys for Good to be both exciting and touching. Voluntourism is naturally fraught with conflict and yet buoyed by the human spirit and the exotic locales provide a fascinating backdrop for a compelling cast of heroes and underdogs”.

Globe Aware , a nonprofit 501(c)(3) develops short-term volunteer programs in international environments that encourage people to immerse themselves in a unique way of giving back. Every activity in which they engage is intended to accomplish one of two things: promote cultural awareness and/or promote sustainability. Chosen projects meet several key criteria: safe, culturally interesting, genuinely beneficial to a needy community, and involve significant interaction with the host community.

Volunteers help to empower the host communities in creating renewable, sustainable programs. While Globe Aware’s financial assistance benefits the community economically, it is actually the involvement and collaboration between the volunteers and community that is the greatest mutual benefit. Globe Aware is not a foundation that focuses on giving out charity, but rather an organization which focuses on creating self reliance.

Fundraising video is an essential tool for non-profit organizations, startups and crowdfunders.  Video can be used…

Even though its a cliche', a picture really is worth a thousand words.  And moving pictures?…

We just wrapped 3 projects for Boy Scouts of America's national office in Dallas.  Our videos…