Our pilot program, “A Journey for Good: Tanzania”, which aired on public television last year, received four regional Emmy nominations — 2 for program producer and 1 for writer, 1 for director of photograhy.

It’s a day of celebration here at Bayside Entertainment! Fingers crossed for a golden statuette at the ceremony on June 9. 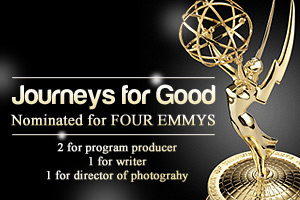 A 13-part series now in development for public television, “Journeys for Good” celebrates volunteer travel opportunities around the world.  For more information, check out our sister site: www.journeys4good.com

We just wrapped 3 projects for Boy Scouts of America's national office in Dallas.  Our videos…

Even though its a cliche', a picture really is worth a thousand words.  And moving pictures?…